Ok so here it is folks, my first hand account of how I have gone from tank to healer in around 2 weeks....

I have had to make some rather drastic changes to accomplish this. My spell bars, my guard and keg smash have been replaced with renewing mist and uplift, all my spells look "green" in comparison to the somewhat colorful spells of my Brewmaster. My UI has had a complete overhaul. New weak auras, revamped the raid frame and tweaked Big Wigs to suit a healer (IE I no longer need it to yell at me when the Sha is casting wounded pride - But I now need to know when sun is casting a calamity). My gear, more specifically my transmog....that was one of the most important things, getting the right look, because we all know its ALL about the asthetics, anyway, after some delving into the depths of my bank and void storage and a few runs of some random old dungeons, I present.... "The Ice" 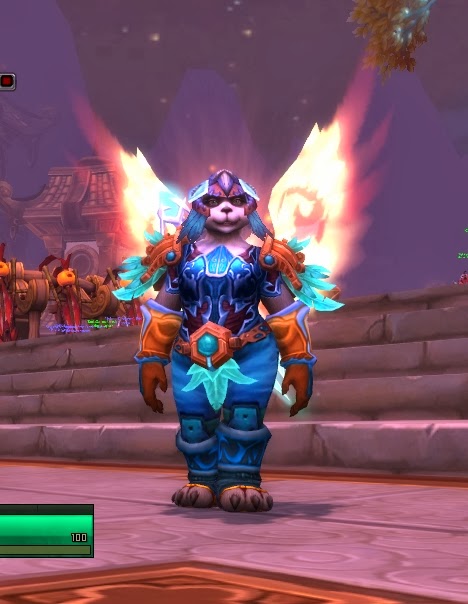 The biggest change that I have had to make though, I did not foresee coming, sure I knew I would have to learn some new spells and learn to Fist Weave and Mist Weave but I overlooked something that was incredibly hard to change. My mentality.

Let me start by explaining my tank mentality. I feel like Chuck Norris, in fact, I could probably kick his butt, I stroll into the raid with my head held high, usually the last one in, I am the first to fight. I feel like entering and saying "Fear not my squishy friends! I have arrived! I shall forge us a path through all these minions!" Before clashing the first bunch of mobs I can find with Zero F**s given for the rest of the raid. Basically, I feel like a god, nothing can hurt me, bosses can pound on me all day and I just don't care, I welcome the pain, no wait, I laugh at it!!

Before switching to healer I went in as a DPS for a few runs, still with my "Queen of the raid" mentality and oh dear did I get handed a big can of sit the F down. I died. To trash. and I didn't just like, lose my health slowly, no, I was one shot. ME, getting one shot, by trash??!?!?! My poor little Panda, she doesn't get one shot! Buuuut apparently it would seem that I am no longer Chuck Norris, while I still hit like a truck I am as soft as a kitten in comparison to what I was. Over a few nights I soon discovered (the hard way) all these wonderful mechanics on bosses that actually hurt non tanks. I took a corrosive blast to the face by mistake and died, I stood in some yellow goo on the floor and died, I got mind spiked and died, and worst of all, I got melee'd by Kadris and yep, I died. Something serious was going to have to change if I wanted to survive long enough to actually manage to heal anyone. So I went back to basics, and researched each fight from a "squishy" point of view. I looked up all the abilities the bosses did and discovered that for most fights I now need to avoid pretty much everything if I want to live.

I think one's feelings waste themselves into words; they ought to all be distilled into actions, and actions which bring results. - Florence Nightingale.


I really like this quote, I think it's very powerful, and true, and this is what I based my mentality on. I tend to talk quite a lot, this is no secret, anyone who knows me will tell you I have a gob like a chainsaw and could happily talk a glass eye to sleep. As a co-raid leader I tend to find myself talking too much, so I stopped talking, apart from direction on a fight and simply focused on what I was doing and the health of the rest of the raid. At first i think it made the guys a little uneasy but they seem to have adapted and they have all  been very supportive of my new role. Slowly but surely I stopped trying to be the leader and became the supporter, I started paying more attention to other people in the group, how they were doing, where they were standing, and what sort of actions they were taking to prevent damage themselves. In turn this has allowed me to help a few raid members with their own issues, and I have learned more about them as people. I appear more approachable now, instead of the loud mouthed tank that was not to be messed with, I am now the lesser loud mouthed healer who is willing to help others and communicates far more directly with the raid during combat.

I have so far managed to 2 heal the first 13 bosses with our Shaman. Thok, which we always 3 healed before was my biggest challenge as I had no idea how to approach the fight. We did it, and with our best attempt on Garrosh yet (22%) I feel much more confident about myself and my abilities. I have also been using my priest more, as her healing has a place in certain fights, however i have managed to go the full 13 on the monk now, we are going to use the priest for garrosh later this week as we feel that the monk/shaman combo isn't quite working for us for that fight just yet. Previously I would NEVER have swapped to another toon, but right now all I want to do is help the guys in my group that have not seen Hellscream fall yet, and if that means benching my beloved monk for a night then so be it. (My priest is still a Panda after all) The point is, I have actually totally changed my approach to raiding, raid leading and playing in general. I have a new found respect for healers, because let me tell you, that job is NOT easy.

Finally I would like to give out some thanks to some folk in the monk community, without whom I would have never made it past the trash before Immersius. Daikatsu, with his Kung Fu healing has responded to nearly every single SOS I have sent out without hesitation, and I really appreciate this! Naoyuki For helping me via the Monk meditation show with knowing when to FW and when to MW and for also responding on twitter with instant help. Tzufit  for her weak auras and her help over twitter. Finally Kristin  for her help and support via twitter. All these guys have been fantastic during this process, answering my "OMGHELP" tweets while I am mid raid and just generally being there with help and information. The rest of the community have also been supportive and I really appreciate all the kind words and good luck wishes that I have received, once again the Monk community comes up trumps!! I'd also like to thank my awesome Husband for being supportive, and helping me out with general "healery" type rules, putting up with the tantrums and the tears and just generally being awesome <3

This tree stands as a symbol of hope. Hope that the land might in time be healed and made stronger by your deeds. - Chi-Ji.

Posted by The BrewMistress at 09:18