On the E-Sofa with Dark - When a Panda meets a Bear and a Draenei....

Happy Sunday!! Yes I know it's two days late but I've been playing host to two of my favourite bears this weekend!! Yes, the sofa has been filled with Panda, Bear and Draenei bums, as I sat down to talk to Sunnier and Arielle about what they've been up to lately, including Alpha testing and tanking Garrosh Hellscream!!


So grab your FINEST brews (better make it a big cup, we'll be here a while) and join me as the Bears take over the sofa..... Hi guys!! It's wonderful to have you here, I'm so glad that you could join me on my E-Sofa!


Just as a reminder, or for people reading for the first time, who are you both, what classes do you play, and how long have you been WoW'ing?

I'm Sunnier, creator of SunniersArtOfWar.com, a Brewmaster guide site and blog. I've been playing for nearly 9 years, though obviously not as a monk. :) Before I discovered my true calling, I played a bear druid (which is why you may see me around as "SunnierBear").

Hello! I’m Arielle and I play a Guardian Druid.  Most people probably know me as the person that writes for the Inconspicuous Bear (www.theincbear.com), or from Twitter (@ArielleEJ).  I’ve been playing WoW since Vanilla (April 2005 actually), although I have taken breaks now and again.  I actually leveled as a Protection Warrior in Vanilla, which was one of the most arduous experiences I’ve ever been through.  For the last little bit of Vanilla I played a PvP Arcane/Fire Mage with some real life friends, and it was awesome.  I didn’t actually switch to the Druid until halfway through TBC, and I’ve been Feral/Guardian ever since (with a brief stint as a DK at the start of Wrath).
Arielle, I heard something about a home for retired bears?

Something like that I guess.  The guild used to be called


I mean, if they’re no longer Guardians, they’re technically ‘retired’ right?  Makes sense to call ourselves the Bear Retirement Home then (BRH website).

What have you been up to lately, how is WoW for you now?

With Garrosh dead raiding is mostly about getting together and having a good time.  We have one new recruit right now so there’s a few wipes while he learns the encounters, but overall everyone’s still having fun which is what counts.  I’ve been waiting for level 100 characters to be available before doing anything serious in Alpha, but now that they are I’ll be doing some work on that soon-ish.


Other than that it’s really just making sure we’re farming Garrosh every week so we’re prepared when the transition to Mythic happens.  I don’t really have any interest in re-progressing on 25m.  Thankfully all of my raiders share that opinion.

It's been pretty quiet lately, after Garrosh. Ideally I would be spending lots of time in the alpha (an excuse to play tauren!), though I've been too busy IRL to spend as much time as I'd like. My ongoing goal on live is to level up pets because I want a baby ox celestial, but that may be a pipe dream since my strategy for pet battles is "pick the cutest ones".

Something I must ask Sunnier, as a fellow mog enthusiast, how is your transmog looking right now?

Funny you should ask, since I just completed a set that I've wanted for a while -- my orange druid-inspired set. I think it passes pretty well as a mysterious monk. 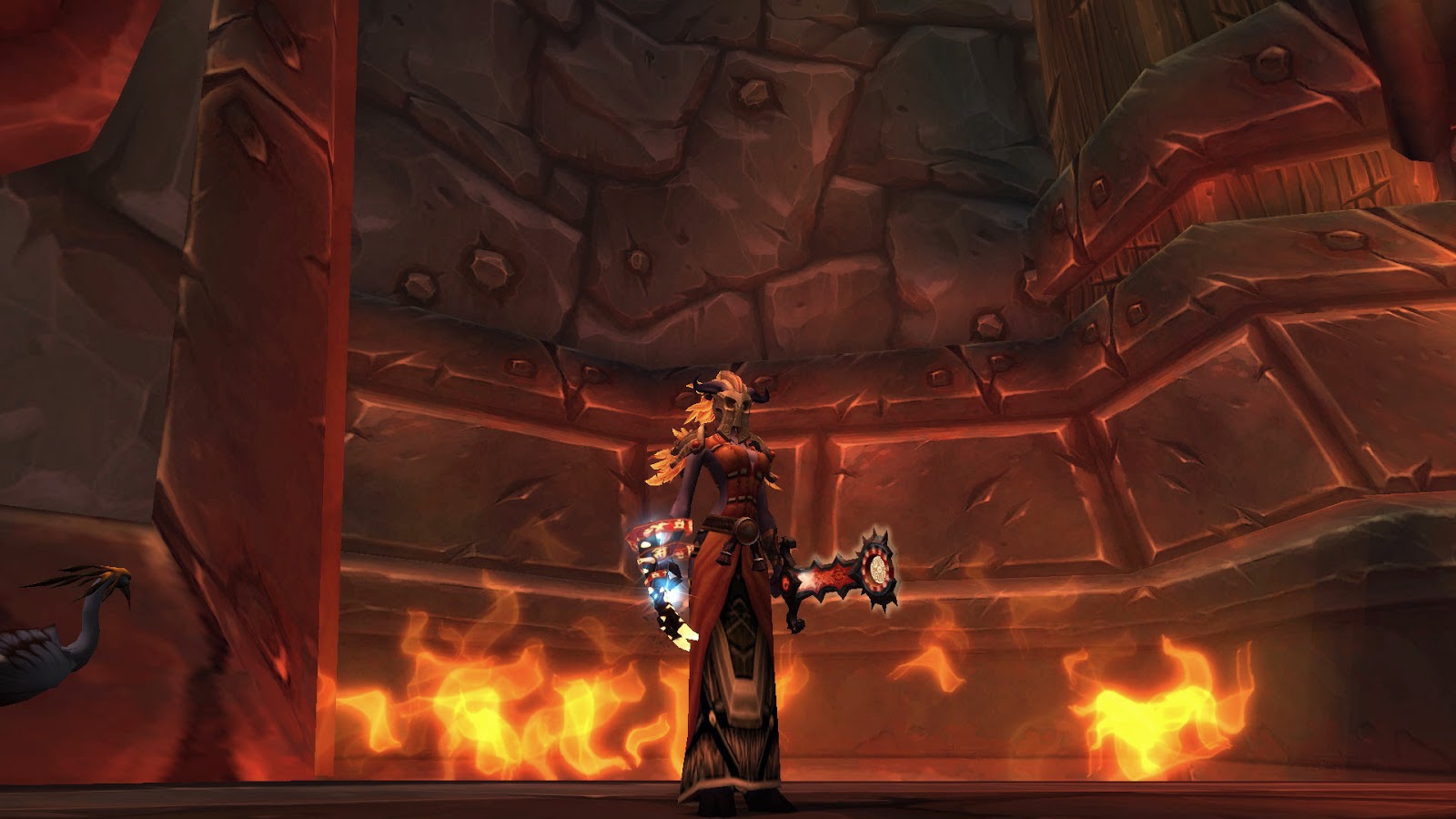 So you've both tanked the mighty Hellscream on Heroic, how was it for you? Any tips?

Honestly it was underwhelming.  I was expecting it to be a lot more difficult than it was.  By far the hardest thing was learning the timings on Iron Stars in phase 4 (since I’m the kite bitch b/c Guardians OP).  Being a “tank” on Garrosh is pretty much a complete afterthought as a Guardian.   Given that we stack offensive stats almost exclusively, you’re supposed to push your DPS as much as possible to make the transitions between phases as smooth as you can.  I am routinely the top DPS through the first 3 phases, and I only get caught in phase 4 because I don’t tank the boss at all.


For those interested, you can check out my Heroic Garrosh Guardian Guide here

I enjoyed Hellscream. There are a lot of different types of fights wrapped into one, which makes talent choices interesting. There's the dps fight, there's the high physical damage fight, the high magical damage fight, the AoE control fight, and finally, the high-damage tank-n-spank where you're tired and really hope you, the person with the easiest job, don't mess up. I was switching talents, glyphs, and gear constantly as we progressed, which I love doing. 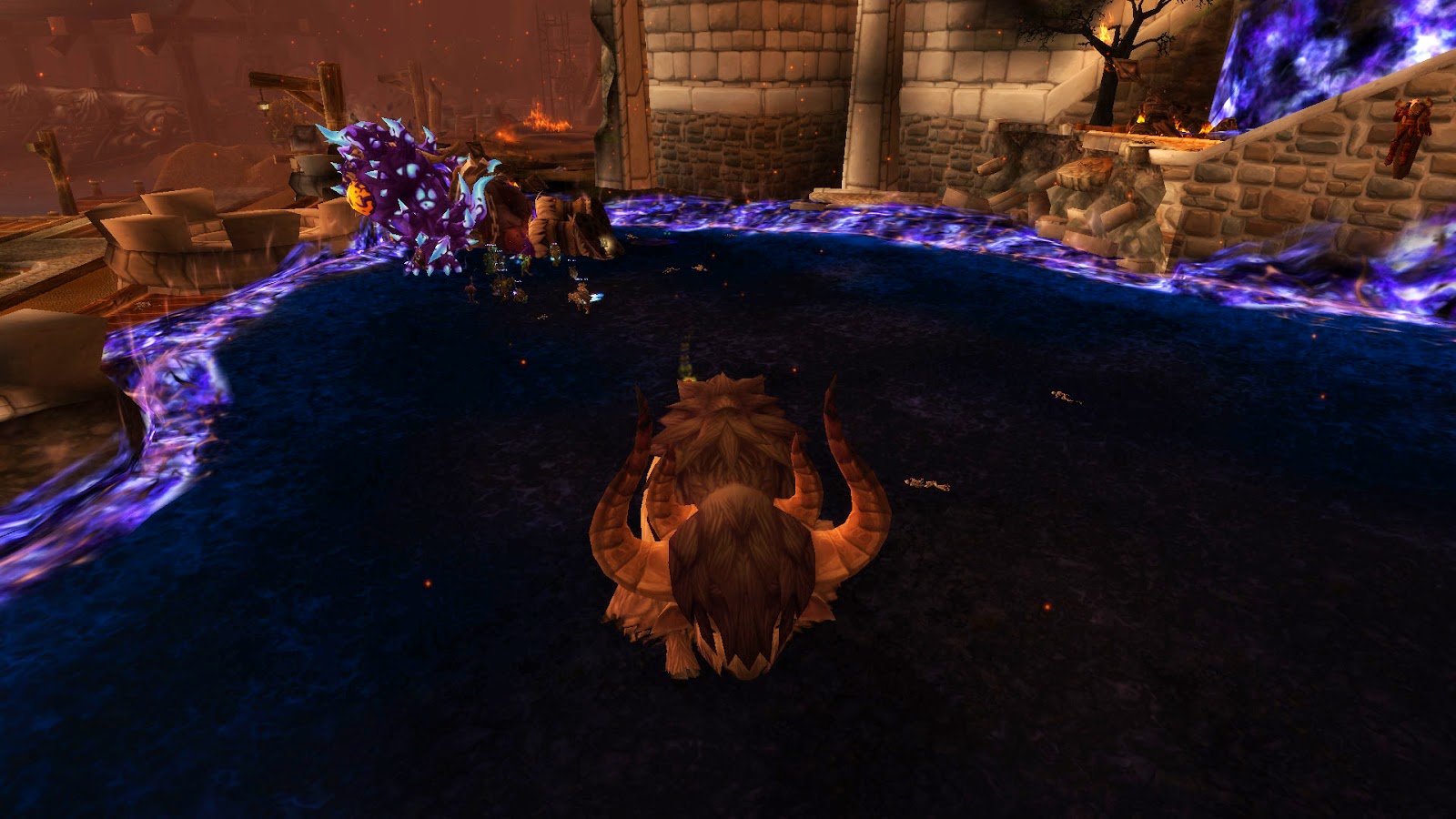 So, what encounter in SoO do you both enjoy the most?

The qualities of the perfect encounter for me are: high tank damage, high movement, interesting talent choices, and low tank downtime. I think Iron Juggernaut fits those pretty well, especially as a Brewmaster. The periodic magic damage is particularly difficult for Brewmasters, but it forces you to make hard decisions (like: should I glyph Guard to better handle the magic damage, or unglyph it to better handle bomb damage). And in this case, the choices are really great because there is no defined best build -- it depends on your gear and healers and skillset.

Spoils.  The rest of the encounters are not that exciting from a tank perspective.  It’s nice to break out of the mould and do something different.  Paragons requires the most attention to detail out of the bunch for me – due to our strat – and I get to turn into a scorpion which is pretty cool.  But I still find Spoils to be the most fun.

So, the alpha landed, how are you both finding it? What have you been getting up to in it?

I've been enjoying my time with a tauren monk. He is a beautiful beast. Brewmasters don't have any significant changes, but I've still been playing around with questing (I always love questing, and every expansion I enjoy it more), and animations. What I'm really waiting for is unlocking level 100 talents, particularly Chi Explosion. I want to see if that talent has some angle I'm missing (because right now it seems sort of confused). 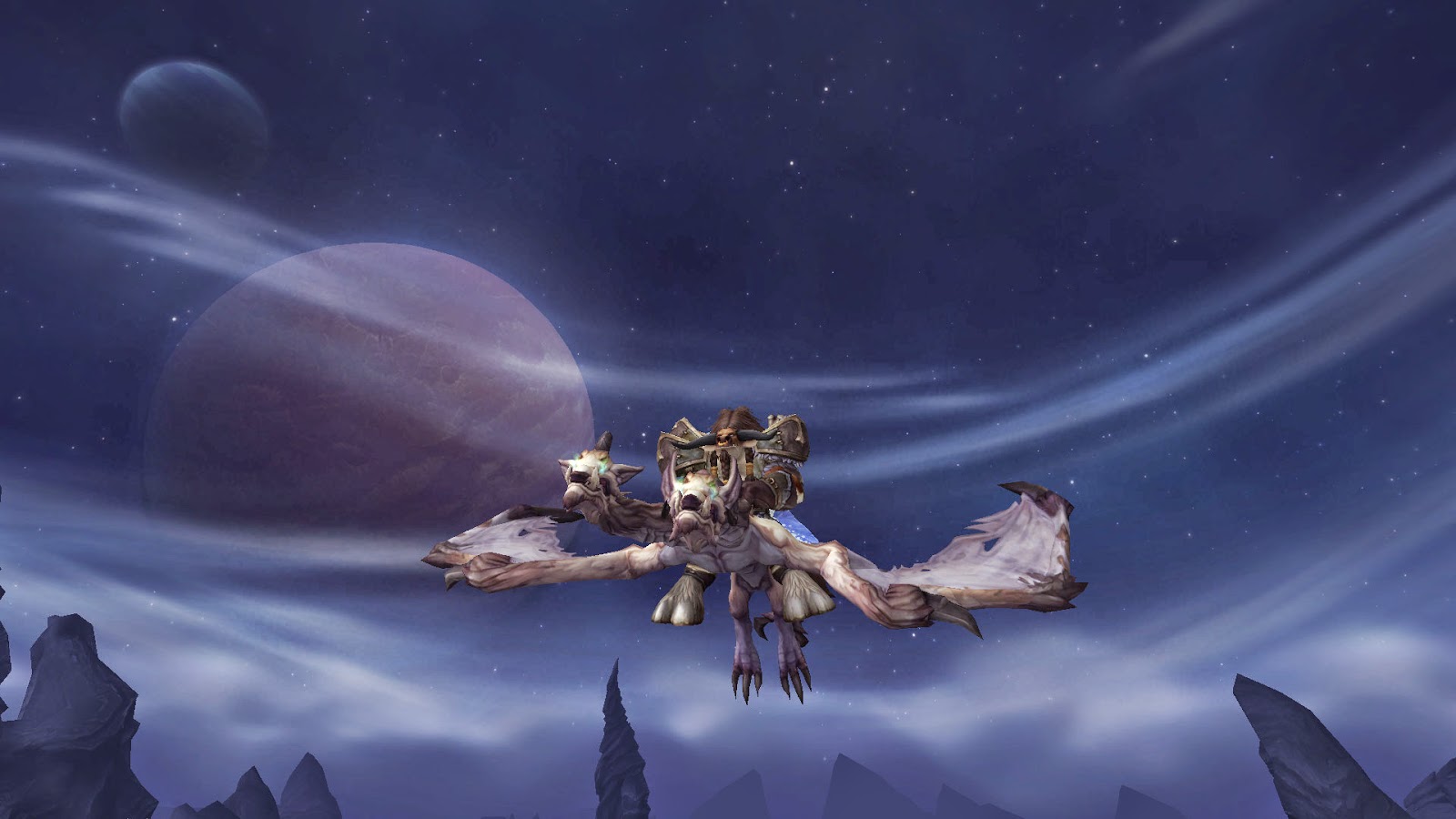 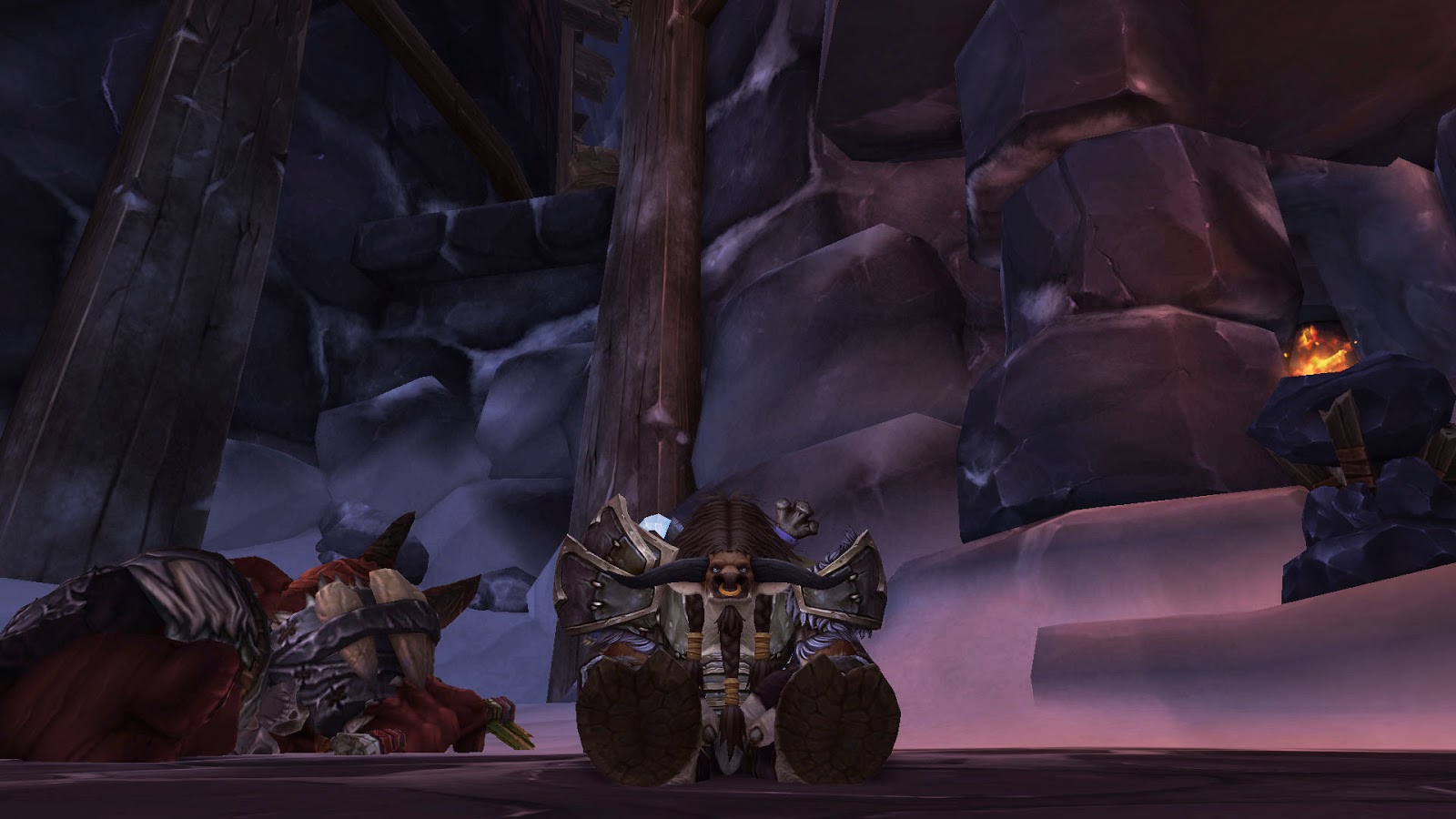 Other than briefly logging in when I first got access, I pretty much ignored it until Alliance was made available.  Now that both Alliance and level 100 premades are out, I’m having a lot more fun.  SMV is PRETTY.  Way more visually enticing than the Horde starting area (Frostfire something?).  I’m really excited to go through it for real on live.

For Guardians specifically it has to be GCD reduction from Haste.  I had my first opportunity to play with it in a dungeon setting last night, and I loved it.  Going back to regular 1.5s GCDs on live afterwards felt painfully slow.  Other than that I’m really appreciating the increasing dedication the developers have to making sure all of the different classes and specs are balanced.  We had a giant leap forward during Mists, and it looks like we’re taking another leap in that direction again.  I really appreciate that.

Definately new character models. What I've seen is so vibrant, I want to experience all of them. I cannot wait to see female tauren, but since I'm Alliance I'll have a tough time picking between draenei, dwarves, and gnomes.
Sunnier we should all know by now that you are the true mistress of the brews, but just in case anyone's not aware, where is your blog and what can we find there?

My site is at SunniersArtOfWar.com, where you can find my guide and any musings I have about Brewmasters. I've also started streaming again at twitch.com/SunnierBear. I stopped streaming a few months ago because a lot of people (by my standards) were watching and it freaked me out. But now I can pop out the chat window and never see how many people are watching and it's okay! You can also find me on Twitter @SunnierBrew.
Arielle, your Inconspicuous Bear forums are awesome, where can people find those and what can they expect to see there?

The forums can be found at http://www.theincbear.com/forums .  There hasn’t been a lot of Alpha discussion yet since very little in terms of mechanics has been available to test until recently.  Other than that there are places to ask general Guardian questions, discuss specific raid encounters, or ask for combat log analysis.  Quite a few of the top US/UK Guardians are regulars there (including Danishpsycho, Buraan, Ahanss, Kartog, and Khaelyn among others) so the discussion is usually polite and detailed.


Sunnier and I have been friends for gosh....over 3 years now?  It’s a real treat to tank with her, and I can always rely on her to get the job done (except that one time she clicked a Warlock portal and died to an Iron Star).  I routinely count my lucky stars that I managed to convince her to come tank for us :)


For those that don’t know I also help out Tickle (@tickletotem) by doing reviews of Guardian logs / armories over at Sentry Totem (http://www.sentrytotem.com).  just a quick reminder that I’m doing it for fun, so any tips you give for my services will go back to fund the site.  You can also simply ask the same questions over on the TiB forums (http://www.theincbear.com/forums).  I do stream sometimes (http://www.twitch.tv/deastin) but I’ve taken a break from streaming farm since it takes up so much bandwidth to stream in 1080p :(


I also host the Team Waffle Podcast (http://www.teamwafflecast.com), which is an all-Druid podcast that covers the PvE side of the game for all 4 specializations.  We also do 2-3 “roundtables” per expansion where I gather up 5-6 people from a given specialization (Rank 1 Gladiators, top tier heroic raiders, and theorycrafters) to talk about the spec is doing at a given point.  I really enjoy doing it and I’ve made a lot of friends along the way.


If you’re interested in becoming a better Guardian, it helps to learn from the best.  So definitely check out Buraan’s raid streams over at http://www.twitch.tv/buraan.  Who better to learn from than the rank 1 Guardian?

So guys, there you have it, all that is left is for me to say thank you SO much to the both of you for joining me on my E-Sofa!!


I hope you all enjoyed the interview as much as I did!! 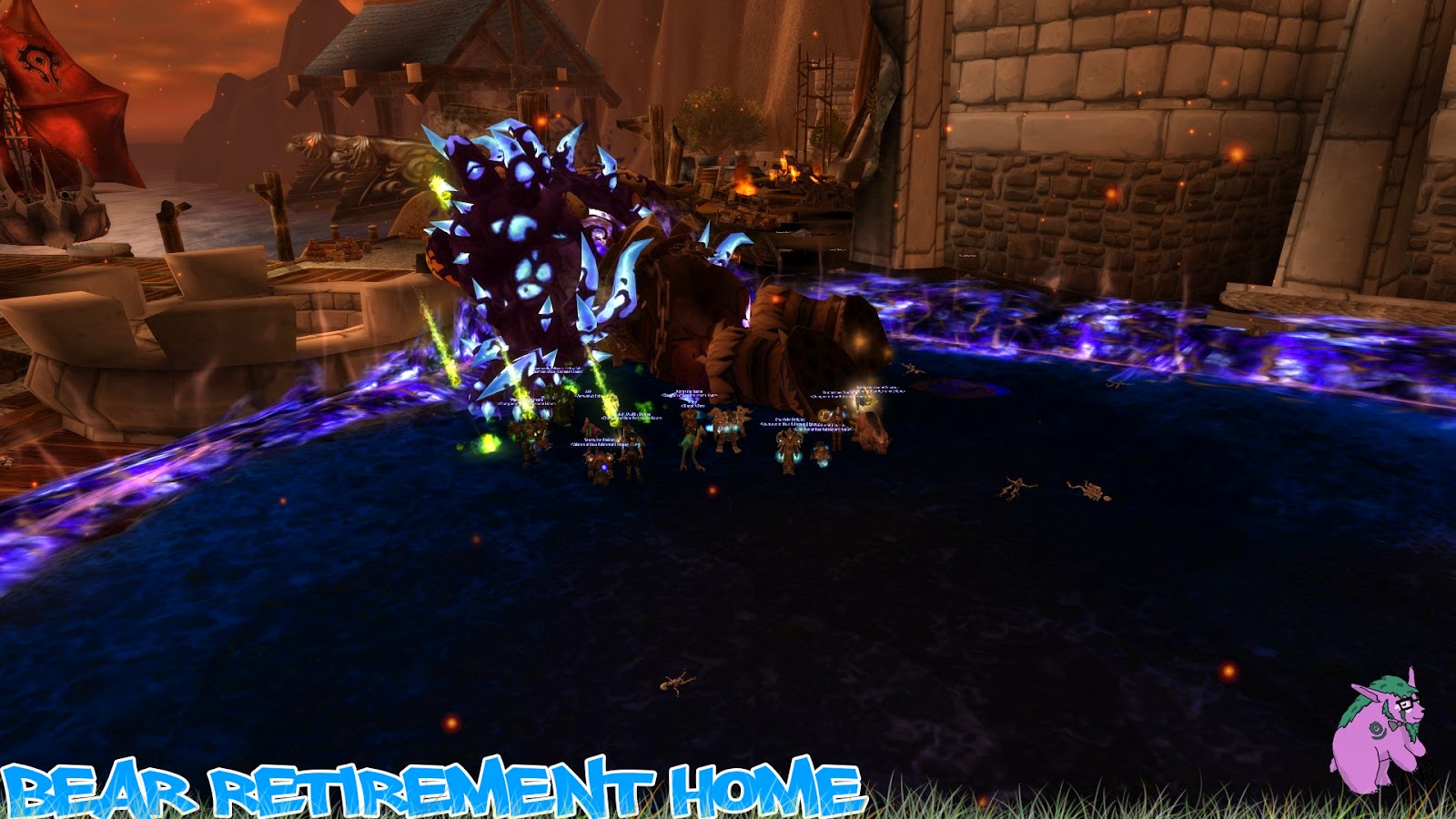 Posted by The BrewMistress at 08:25