Heroes of the StormTechnical Alpha review

I have been lucky enough to receive an invitation to play the Technical Alpha for Heroes of the Storm. I am going to give an overview of what I think of the game, and I will also compare it to other games of it's nature. So sit back, grab a heroic brew and join me in the storm....


A quick overview of the MOBA games.

So, for anyone who has never played a Multiplayer Online Battle Arena (MOBA)  game, here are the basics: Two teams of 5 players (can be less on smaller maps but usually no more) will battle against one another on a (usually) symmetrical map. Each team will have a main base, surrounded by barracks (from which creeps will usually spawn), and towers which will shoot at enemy players. Each player will pick from a pool of heroes, with each hero having 4 abilities (again, usually) which will become available as you gain levels through experience, which will be granted through killing enemy heroes and farming neutral or enemy creeps. Players will also gain money for kills, which will enable them to purchase Items to make their hero stronger. The aim of the game being to make your teams heroes strong enough to take out the enemy base. 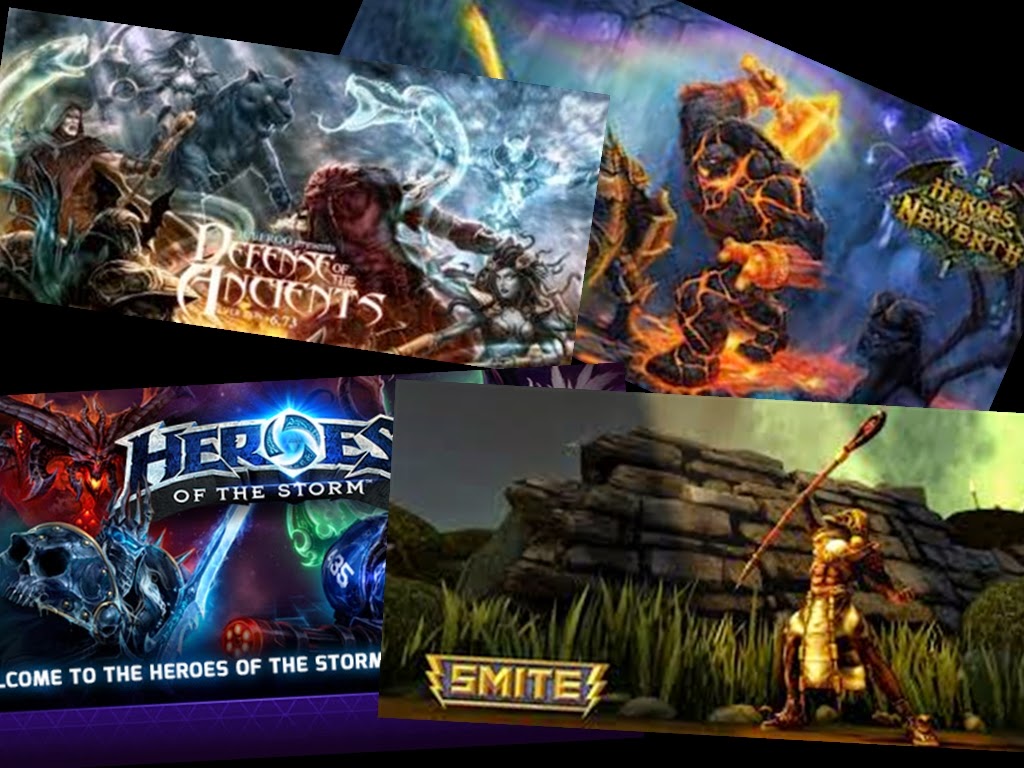 If you've never played one of these games before, or have played once and not bothered playing again, the reason may be that the learning curve for these games is just too damn steep. Not only do you need to know all the abilities of a hero, but you need to learn how to lane (farm creeps), you need to learn which items to purchase (some items only suit certain heroes), and you need to be incredibly aware of your surroundings and positioning while doing all this. Previous to playing WoW I played Heroes of Newerth quite a bit (Basically DOTA with different named heroes). I really enjoyed the game, after I played it for about 6 months to try and learn how to play it, fortunately having a patient husband meant that I could learn in peace by just playing against him. Unfortunately, the players that play these style of games (in my experience) tend to be more than just a little unforgiving when new payers attempt to learn the game, and instead of encouragement, more often than not, I have seen these new guys (and been on the receiving end of it) take an onslaught of insults and name calling because they don't know how to play. Sadly having just one person on your team who is not self aware and doesn't know how to play means they will get ganked (killed) a lot, thus "feeding" the other team, giving them more money and experience.
The problem I find is that there is no real safe place for people to learn, when I say safe I mean safe from the constant barrage of "feeder/noob/useless/idiot etc" insults that they will inevitably receive. This makes the game incredibly unattractive to most. Games are meant to be fun, and there is nothing enjoyable about trying to learn a game in such a hostile environment. So for 50% of the people who try playing these games, they end up playing once or twice, assuming they suck, and not picking them up again.

The first thing I noticed about HotS is that there are NO ITEMS to purchase, and you level AS A TEAM. These two factors alone, completely negate the "oh my goodness what items do I buy" and "omg that guy's shit he's level 2 while we're all level 6" problems that I found quite predominant while playing other MOBAs. You get to pick talents for your hero as you level, and the maximum choice you have is 4 options, which to me, is so much more simple and attractive as a new player.
Most of the other aspects of the game are the same, you can kill creeps to get XP, and also enemy players/towers/other structures. However, with no individual gains from kills, there is no contest for getting the killing blow and it becomes more of a team effort, another issue dealt with. (Being accused of Kill Stealing is one of THE most annoying things in a TEAM game!!)
Another thing I really like about this MOBA is that on each map, there will be a main protagonist that will assist whichever team earns their favor the quickest, which makes the game less about getting the highest KDR and more about achieving objectives, which is something I think other MOBAs lack, and thus, they usually become a kill fest, which gets boring after a while.

If you do not want to know about any game content such as heroes, maps and do not want to see a game play video STOP HERE!!!!!!!! You have been warned!!!!

How it all starts.

You begin the game by playing a short tutorial which goes over the basics of your character and how to use them. It shows you the objectives of the game and forces you to play against AI until you understand enough to get stuck into other players. There is an individual level system in the game, which you can increase by winning matches and completing daily quests. When you queue for a game it will put you against people of a similar  level to yourself. (Note that you must only reach level 3 because you can take the training wheel s off and play against real people!)

Currently there is no map selection tool, though I suspect that if you were to create a group you could select a map, or they may have plans to implement this in the future. The maps available in the Alpha are as follows:

This map features the Raven Lord, for whom you must gather "Tribute" upon receiving 3 tribute from either team, he will help you out by cursing your enemies! 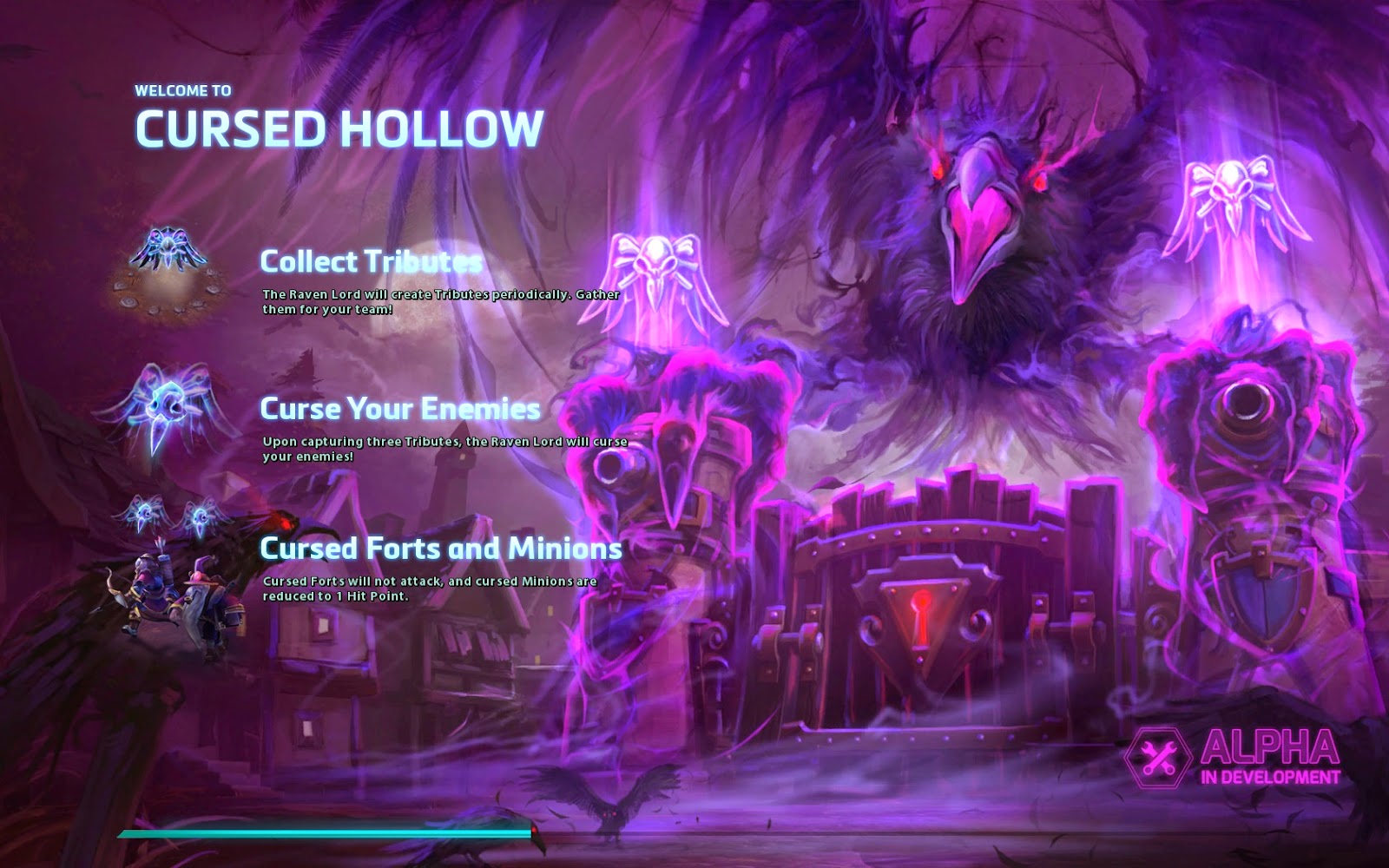 A really fun map that makes the team go below ground to collect skulls from mobs to empower their Golem (1 per team) every few minutes, quite a crazy push map that I enjoyed playing immensely!! 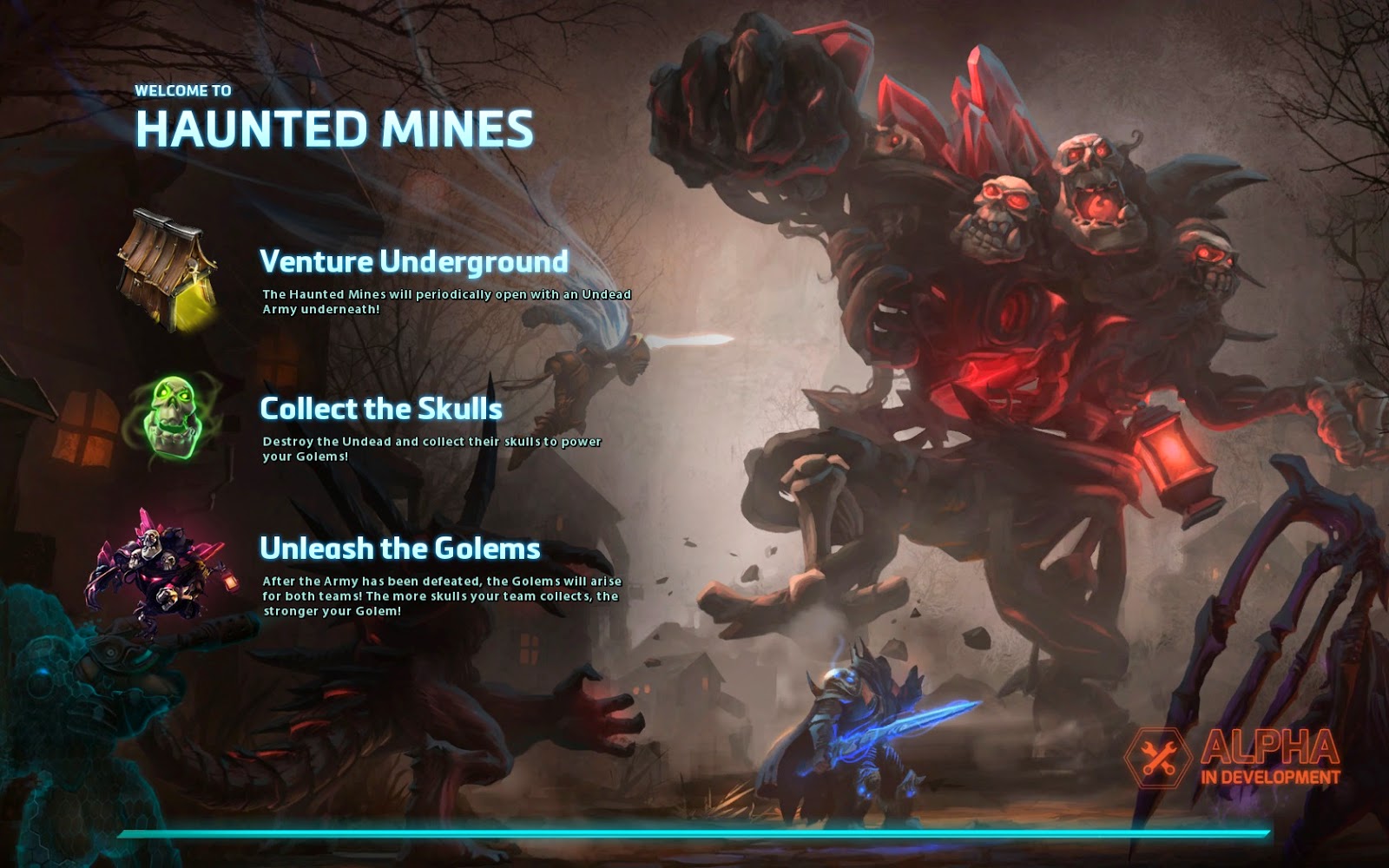 2 Shrines appear at the top and bottom of the map, with another in the middle, one team must control top and bottom in order to activate the central shrine and release the Dragon knight!! One of the more "positional" maps, whereby having the right players in the right place is the key to winning. 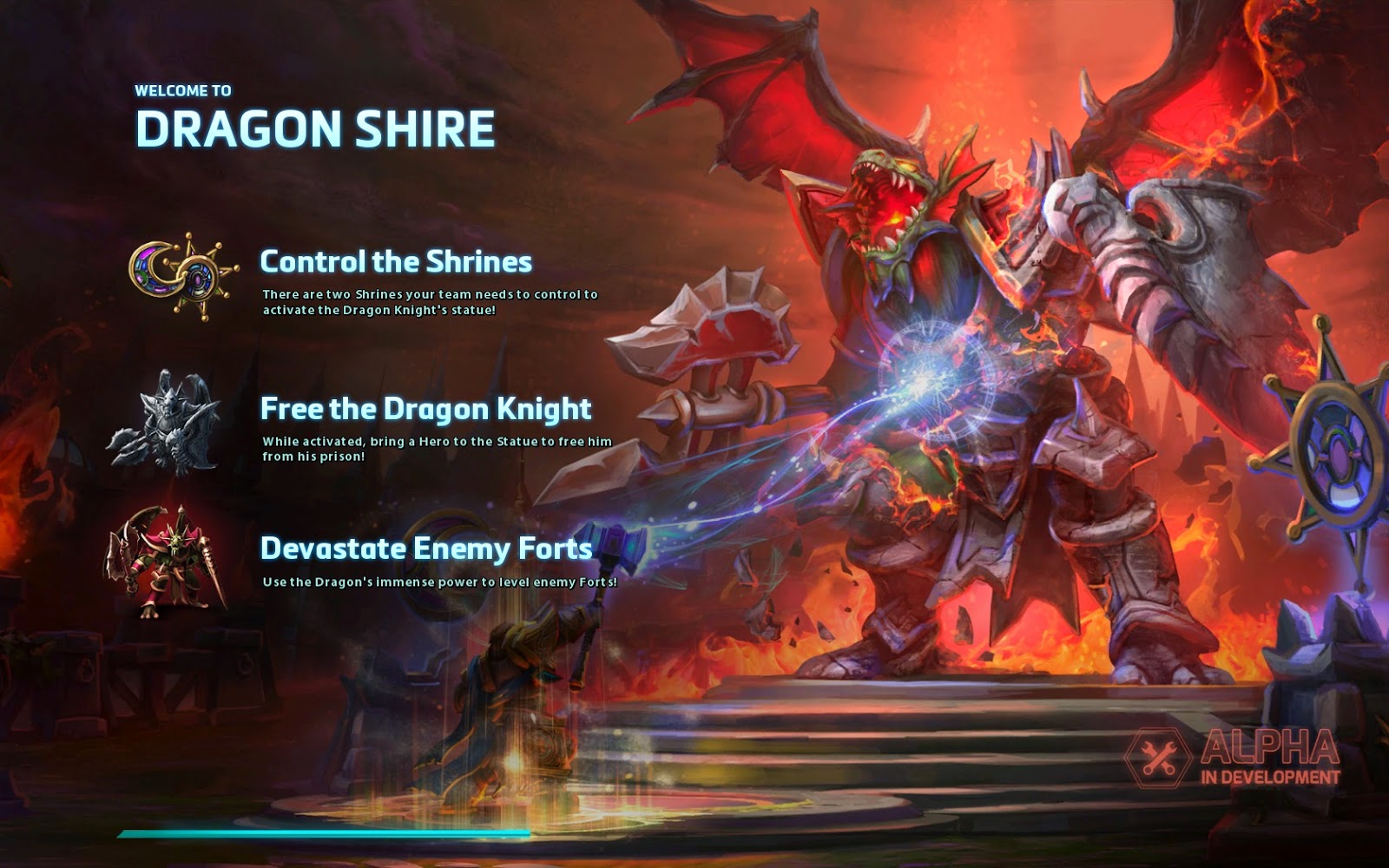 Last but not least, my favorite map, featuring Cap'n Blackheart, who, in exchange for Dubloons, will periodically bombard yer enemy team with his cannons! 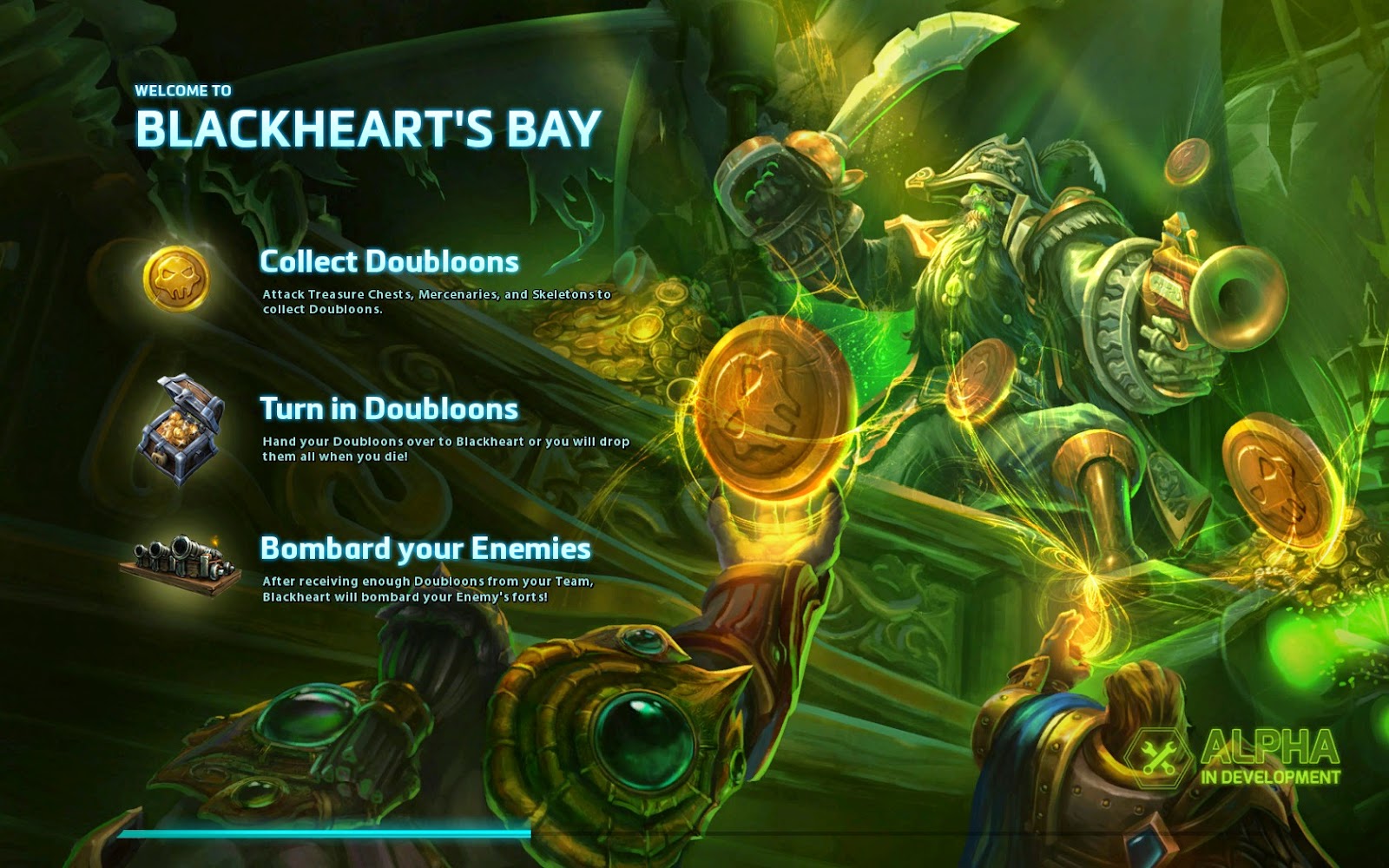 As it stands, these are the only maps available for play, each of which requires a different strategy to win, I will say that I got put into Cursed Hollow quite a few times in a row, which was slightly annoying as it's my least favorite map to play, but it did encourage me to play some different heroes to add some variety.....which reminds me..... 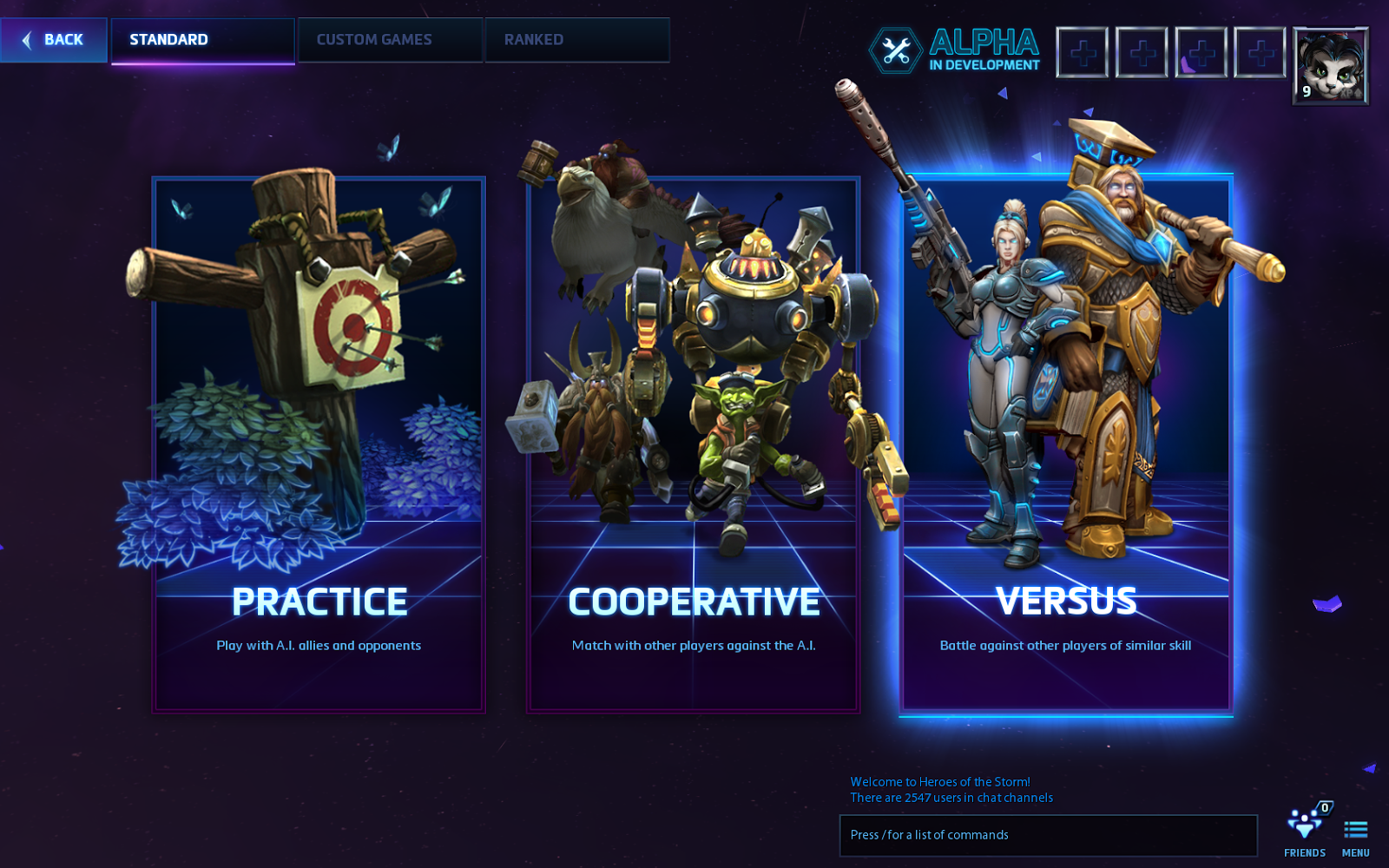 As far as Free to play heroes goes, there are only 6 available, however you can purchase more with real money or in came currency. You may also purchase mounts and alternative skins for your heroes. Each hero starts with a choice of 2-4 talents with 4 becoming available at later player levels, this is nice as it doesn't burden new players with too many choices, enabling them to concentrate on other mechanics. Once you reach a suitable level, you will begin each game by picking a talent from 4 options, from there, your hero will already have 3 abilities available on Q, W and E. Most of the talents I have seen so far are passive, but there are a few "activatable" ones, which seem to go on buttons 1-0, the passives will usually enhance an ability you already have. When your team reaches level 10 you have access to your heroes ultimate ability, this will be a choice from 2, or in Abathur's case, you only have access to a single ability.
All of the heroes will either be a Warrior, which is your tanky, up-in-your-face, you cant kill me hero, an Assassin, which are your damage dealers, Support, which bring the heals and other buffs or a Specialist, which will have a range of abilities and a a unique playstyle, foe example, Abathur doesn't actually go into battle, he can "enter" other heroes on your team and assist them, or for his ultimate, he can clone any ally and you have access to all their skills for a limited time. This may seem OP, but when you consider that for the majority of the game, you play 4vs5 when you have an Abathur, it balances it out. Would I recommend this game?

Short answer, yes. Longer answer, as I previously stated, it is a nice simple game to pick up, that still has all the aspects of other MOBAs, but without the crazy complexity, meaning it is attractive to the less experienced MOBA player, that just wants to have some fun with friends. Over the next week I shall be compiling some game play to put together into a video, which I shall add to this post!! Posted by The BrewMistress at 06:35