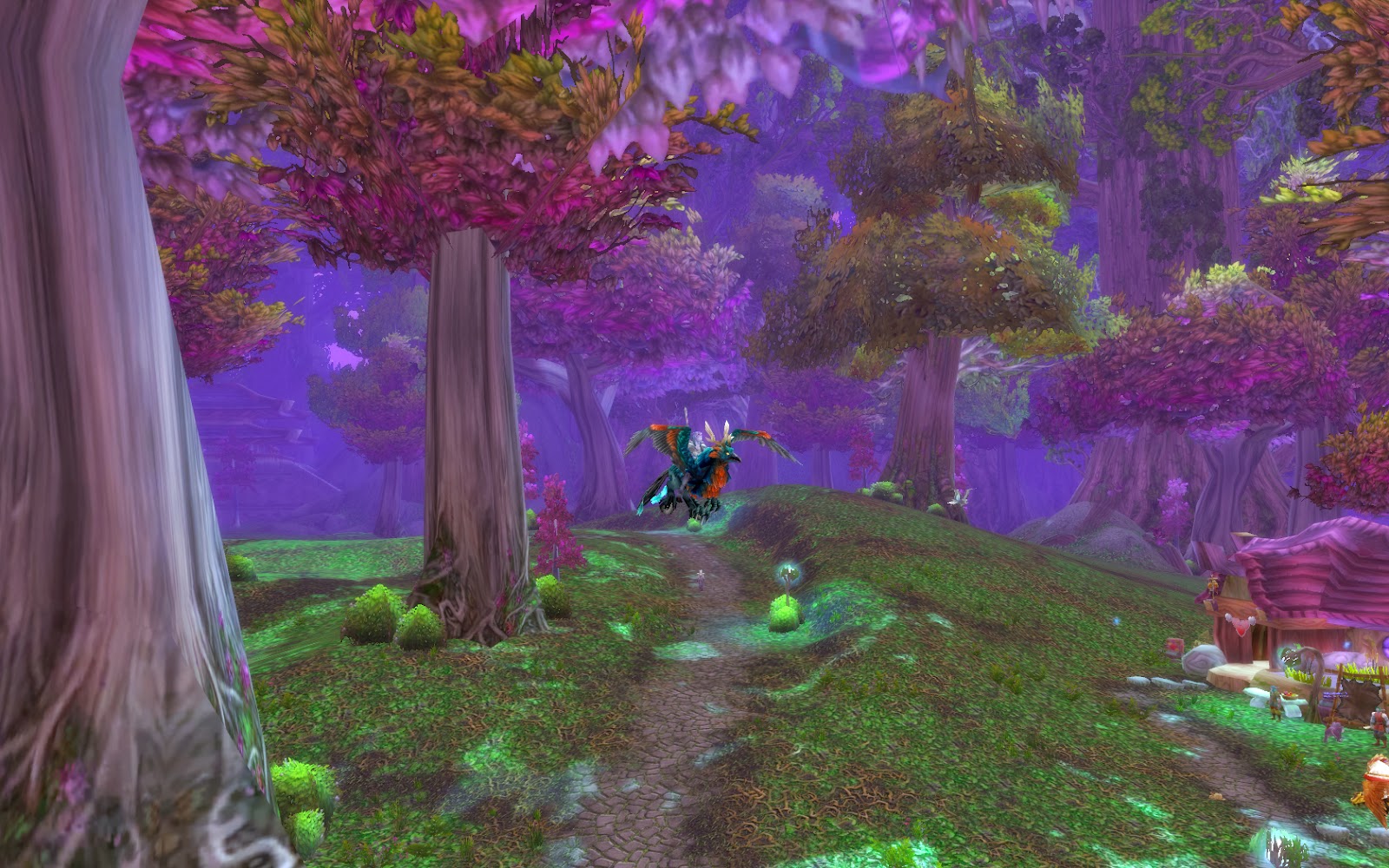 Nynaevê flew for a good few hours on the Hippogryph, after flying over nothing but sea she was eventually surrounded by beautiful forestry, with the odd quaint little building dotted around. Eventually the Hippogryph dropped her off on a small island, with not much but a dock on it. She turned to the Hippogryph and smoothed the feathers on the back of its neck, a way of saying thanks that Stephanos had taught her. The creature caw'ed in glee before gracefully taking to the skies once more, to return to it's master. She surveyed the isle before her, There are Three docks here....which boat must I take? As if in answer to her question, a deck hand from the boat stationed at the middle dock yelled "All aboard for Stormwind!!" Well that was a spot of luck! She hoisted her staff and small bag over her shoulder and trotted down to the dock.
"One trip to Stormwind please!" She gushed excitedly at the deck hand.
"Hop on board Madam, don't mind the sailors, try not to fall off the side!" He gave a short bow and ushered her onto the ship. What a strange thing to say, why would I fall off the side? She saw immediately why when they set off, the ship was old and it lurched away from the dock, almost sending her onto her backside had she not been leaning on a crate at the time!
The trip was long enough that she could sleep. When she awoke the air smelled different and the pink hue in the sky had been replaced by a clear delphinium blue one. Nynaevê hadn't seen sky like this since Pandaria!
"Laaand HO!" A yell from the deck hand in the crows nest made her jump.
"Alright boys, bring her in nice and easy now!" Yelled the captain.
THUNK!! The ship clipped the dock and almost sent her over again. The captain was obviously not the best sailor in the world! Still, i'm here in one piece! She thanked the crew and stepped onto the dock, looking up for the first time at her surroundings she was gobsmacked. 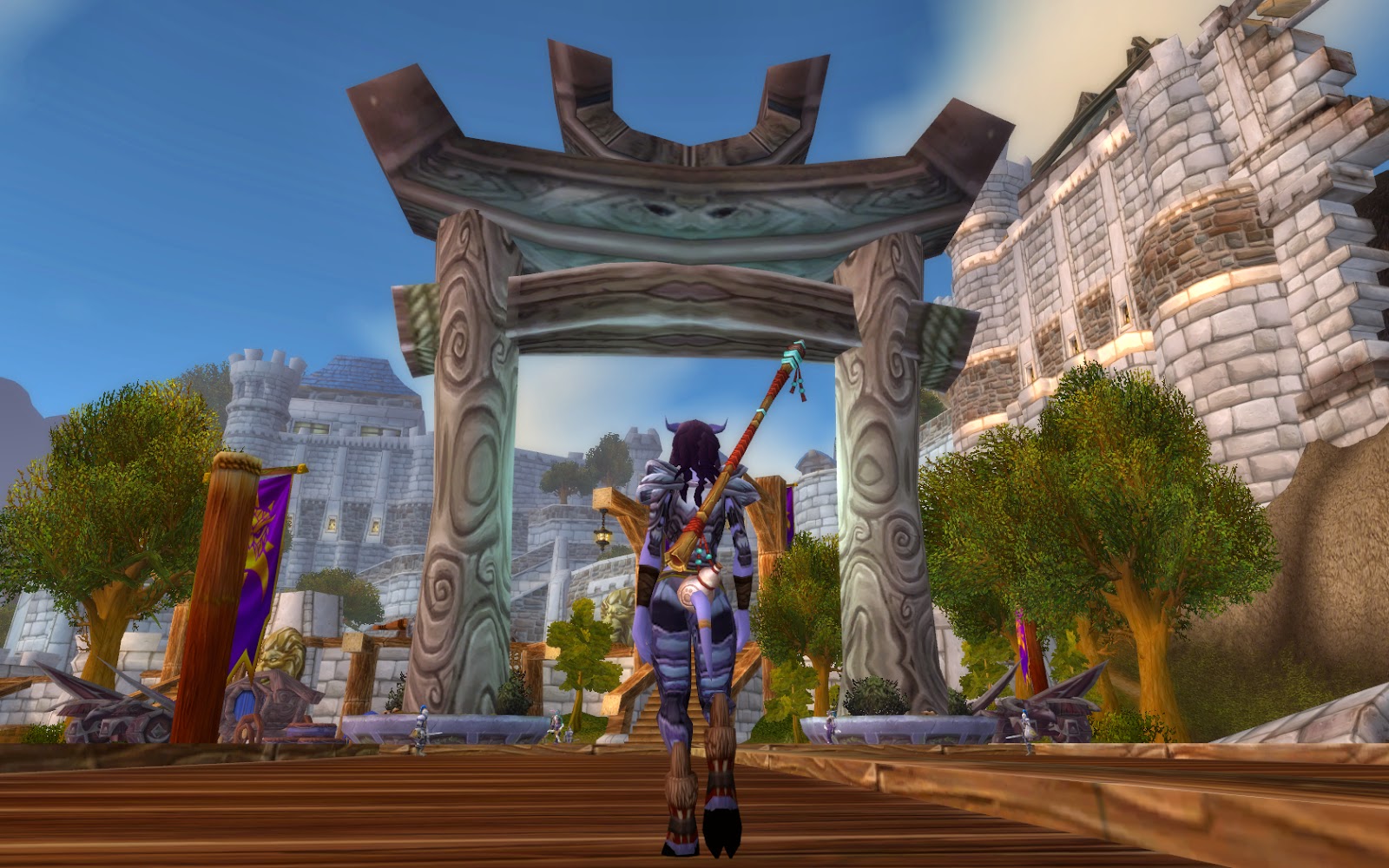 What a sight! She hadn't really known what to expect but this surely surpassed any ideas she had come up with. Not knowing where to go or what to do, while at the same time wanting to go everywhere and do everything she made her way up the steps into the city. Everywhere she looked was busy, people seemed to be bustling about their daily businesses, and everyone seemed to know where they were going.  I will NEVER know my way round this place she thought, suddenly missing the serenity and hominess she had found on of Azuremyst. A distant memory of Lorewalker Cho came to her. 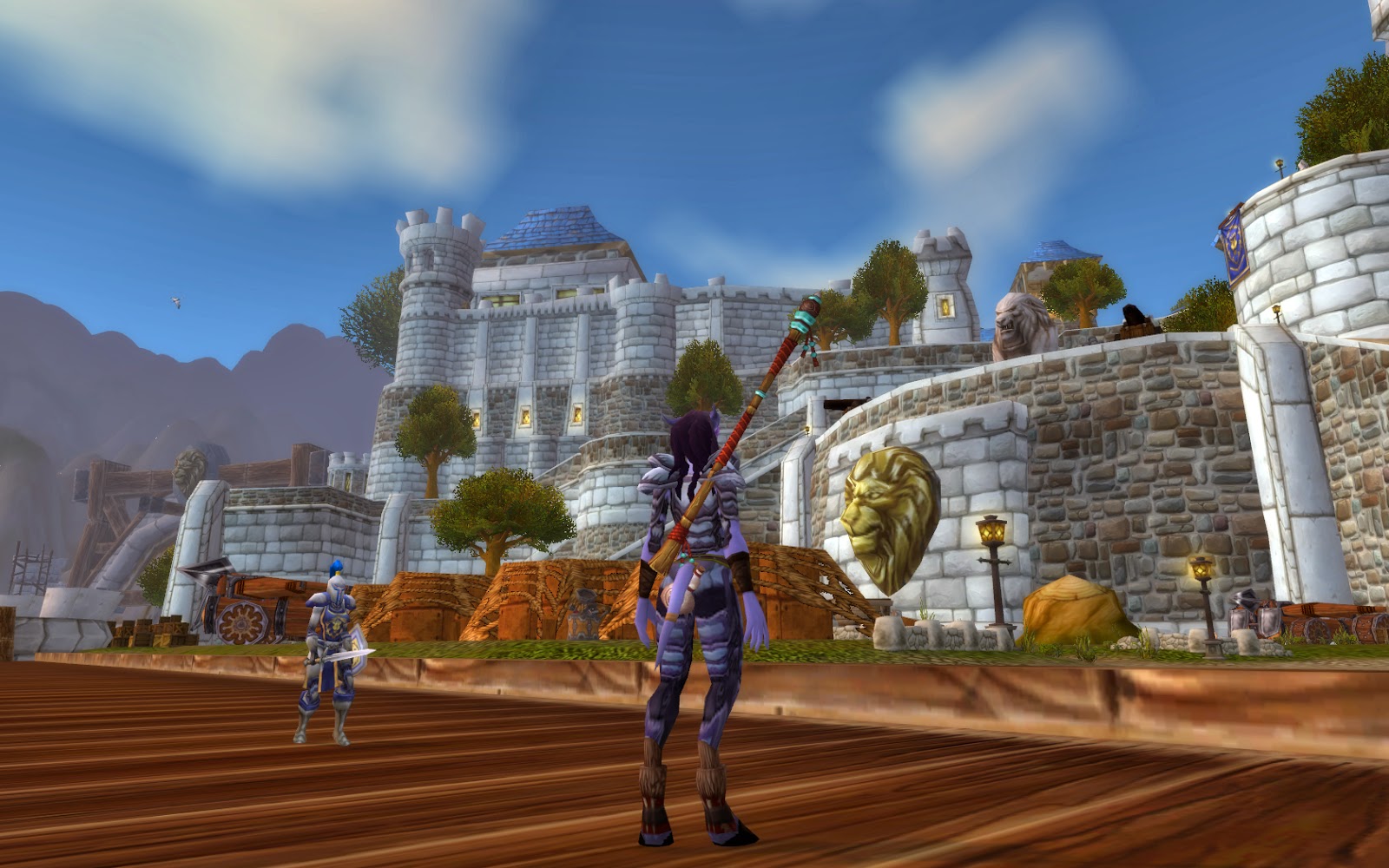 The wise old panda was serving his special tea. For a time they sat in silence.
"It's funny" She exclaimed, the old Panda looked at her with inquisitive eyes,
"Silence is funny?" He asked. "No, the way you can enjoy someones company, even when you're not talking". She smiled at her friend, and the Pandarens eyes lit up.
"Ah, young one, you are understanding the beauty that silence can sometimes bring to life!"
"I love that about Pandaria" she sighed happily, "always there is so much peace."
Chos face went a little sombre, "This is true, but do not expect to find this peace everywhere you go, young Nynaevê. Some places are far from peaceful....but if you have inner peace, you will find happiness, even in the loudest of places."

"HEY....MOVE!!!!" she was startled from her daydream by a new voice, she span round to face a very short and stout little man pushing a cart full of things that she had never seen before, she had to jump out of his way, lest she be hit by his cart. Snapping back to reality she supposed there was someone she could ask for directions, her tummy was grumbling and the sea air had made her very thirsty. She noticed what she thought must be a guard standing by an arch way, he was dressed in some very shiny silver armor.
"Excuse me"she asked tentatively,
"Ma'am" he bowed his head courteously, "Can I help you with something?"
She wasn't used to this politeness or formality! "Well, I'm new here, I'm lost, and I need food and drink, if you could show me where to go?"
The guard politely gave her directions to an inn where she would also be able to stay if needed, she thanked him and made her way deeper into the city, wishing she had written the directions down. 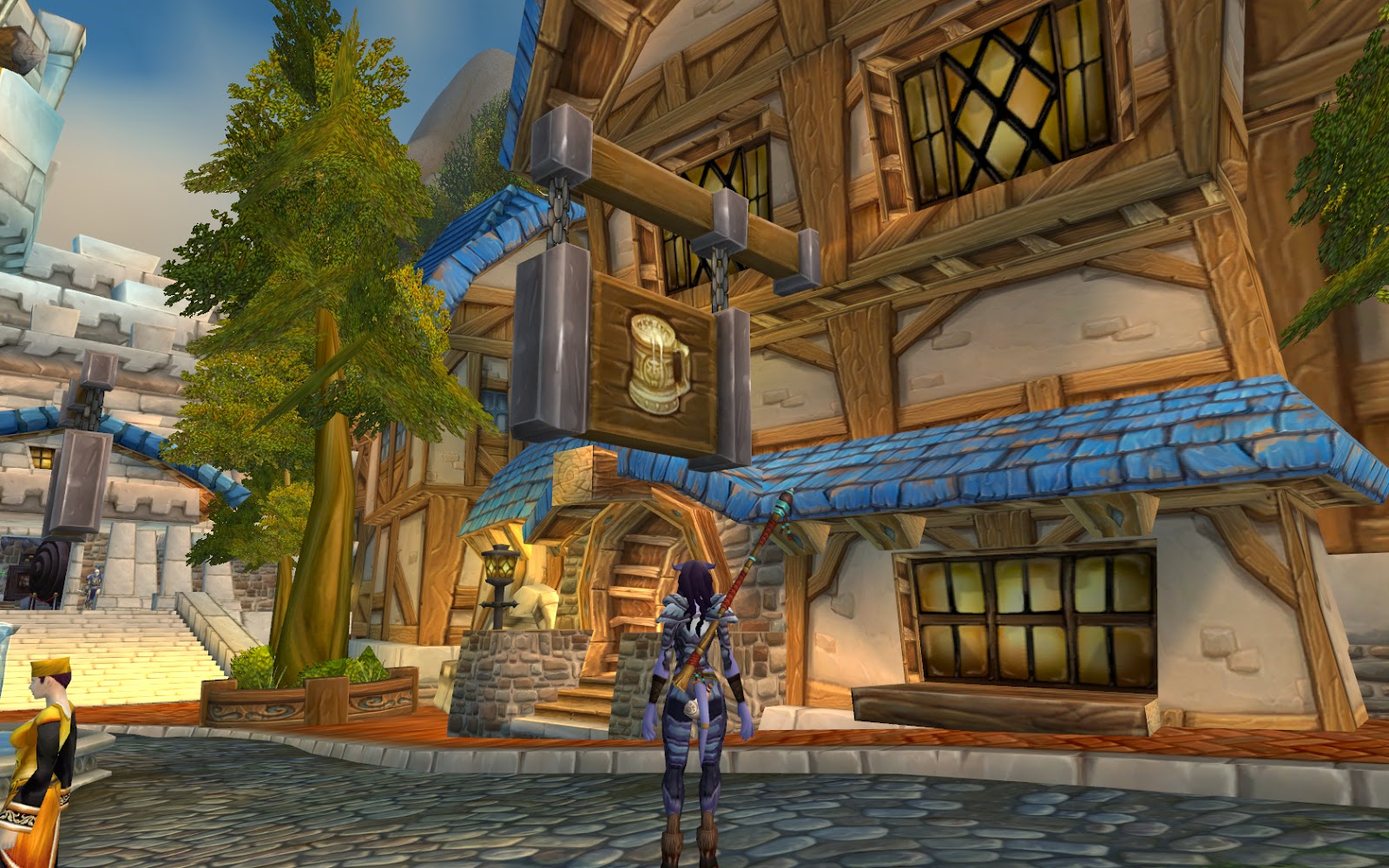 Eventually she found herself stood in front of The Gilded Rose inn. The innkeeper was a human, who introduced herself as Allison.
"I have a room spare, but no cook to make you dinner, though you might want to try the Blue Recluse for that" Allison showed her to a neat little room, where she put her bag before setting off to find the Blue Recluse. Trudging through the city, she saw the funny little man again with his cart, and was quicker at getting out of the way this time! She saw many shops, most of which had shopkeepers stood in the doorway, either talking to passers by or yelling to the shopkeeper next to them. One thing she noticed about Stormwind was despite its hustle and bustle, it really was beautiful city. The buildings were all old and finely decorated. There were lawns with perfectly kept grass dotted about, and many statues and fancy decorations. She finally arrived at the Blue Recluse. She almost missed it was hidden behind some trees in a small square type place, with a large central tower. 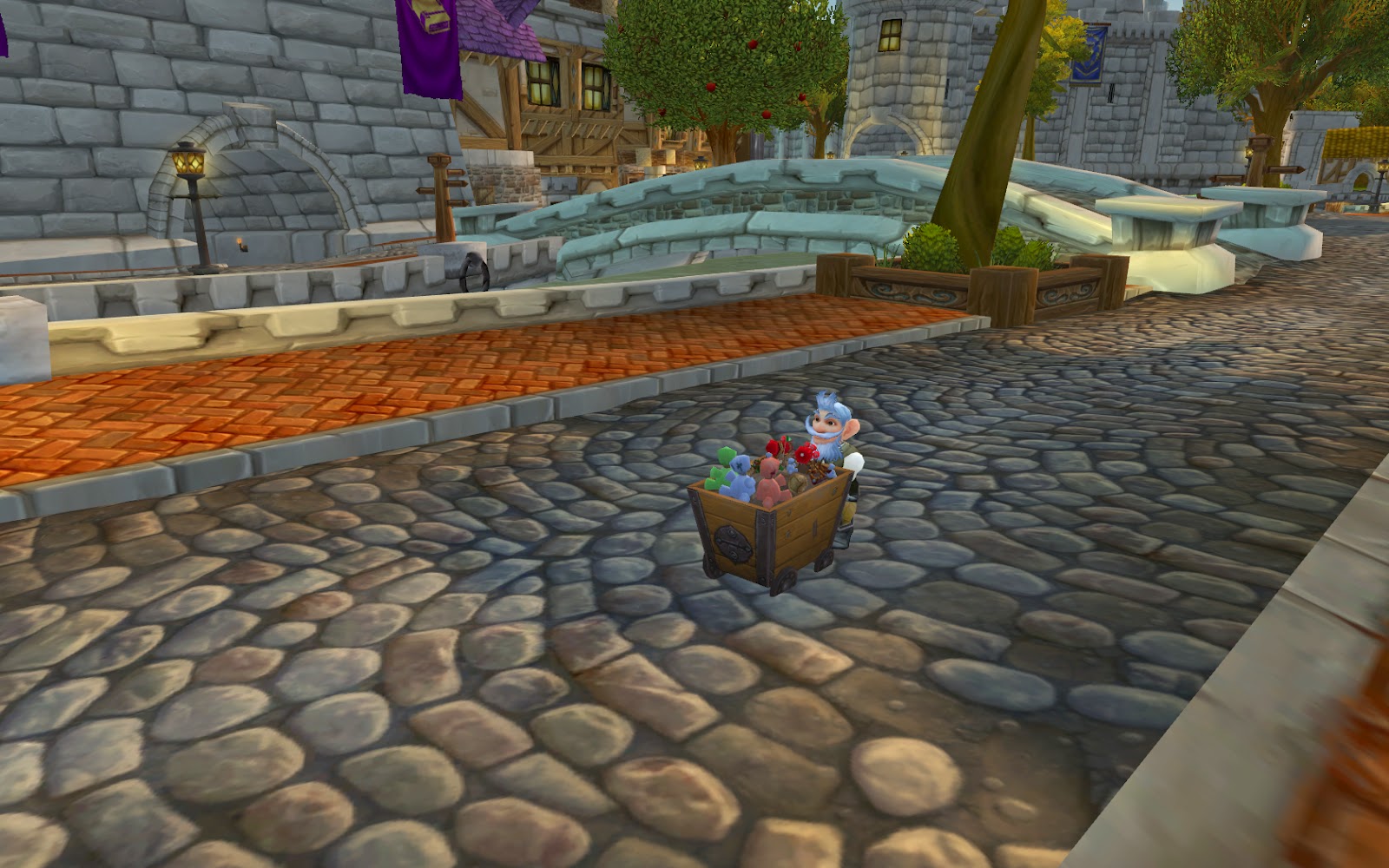 Stepping into the in she was greeted by a man.

"Afternoon!" he said brightly, "looking for something to eat?" 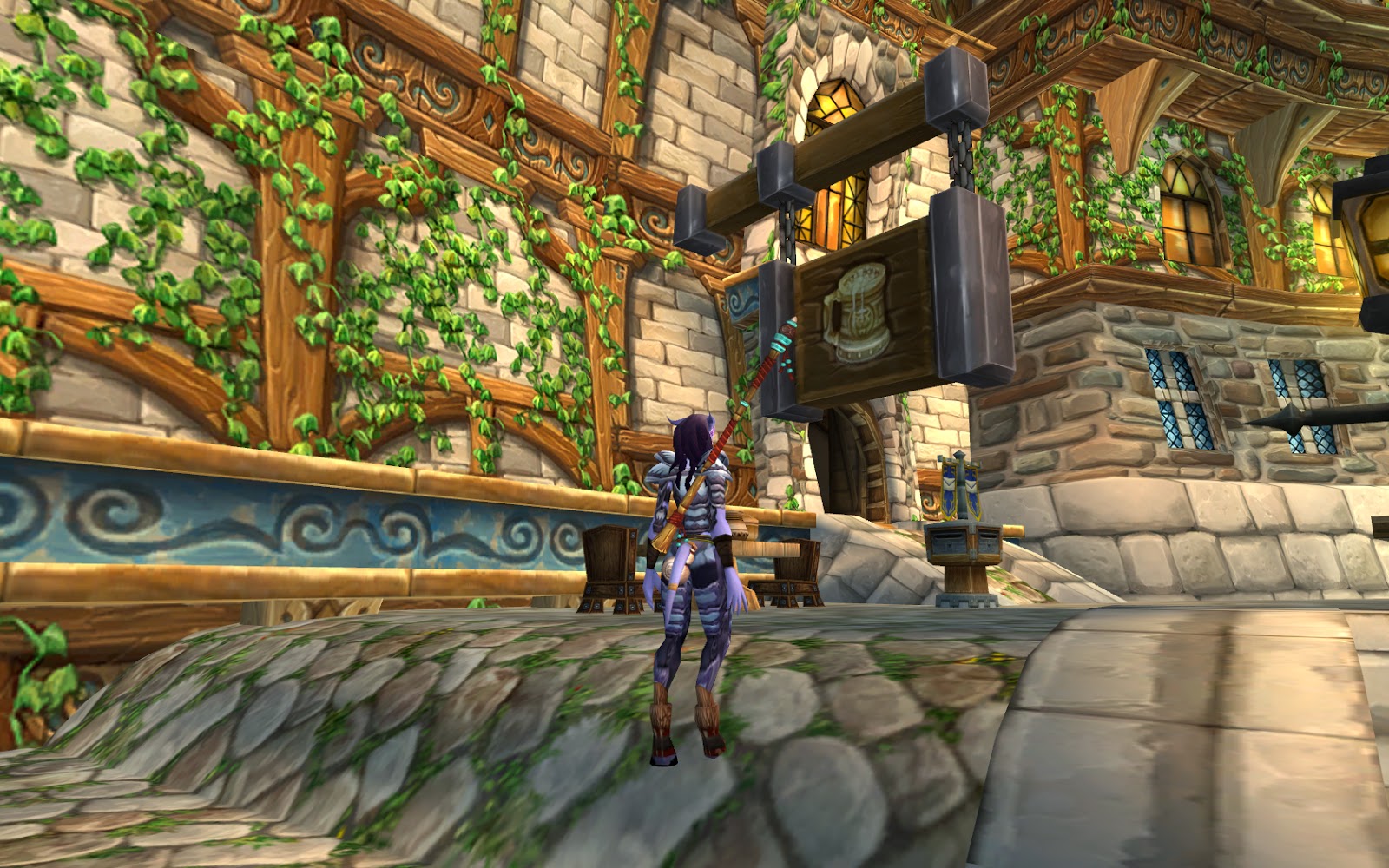 "Yes, and something to drink if you have it" she repllied hopefully.
"Well, you've come to the right place! I'm Steve Lohan, and this here is Angus" he motioned to a man who had just come out of a room at the back of the building. "Angus here is the finest chef in ALL of Stormwind, isn't that right Angus!" Angus said nothing, but smiled lazily and brandished a large knife looking object before going back into the room from which he had emerged.
"Yes, we have food and drink here young...sorry, I didn't ask your name?"
"Nynaevê" she replied, slightly bowing her head.
"Wonderful!! Well Nynaeve.." He waved wildly at a man stood behind the bar, almost knocking the glass he was cleaning out of his hand, "Joachim, is my bar tender, he will fix you up with a drink right away!" Clearly Steve had a zest for life, I have never met someone THIS enthusiastic, but I think I like it!  poor Joachim managed to fumble with his glass, then he smiled and nodded to Nynaevê. 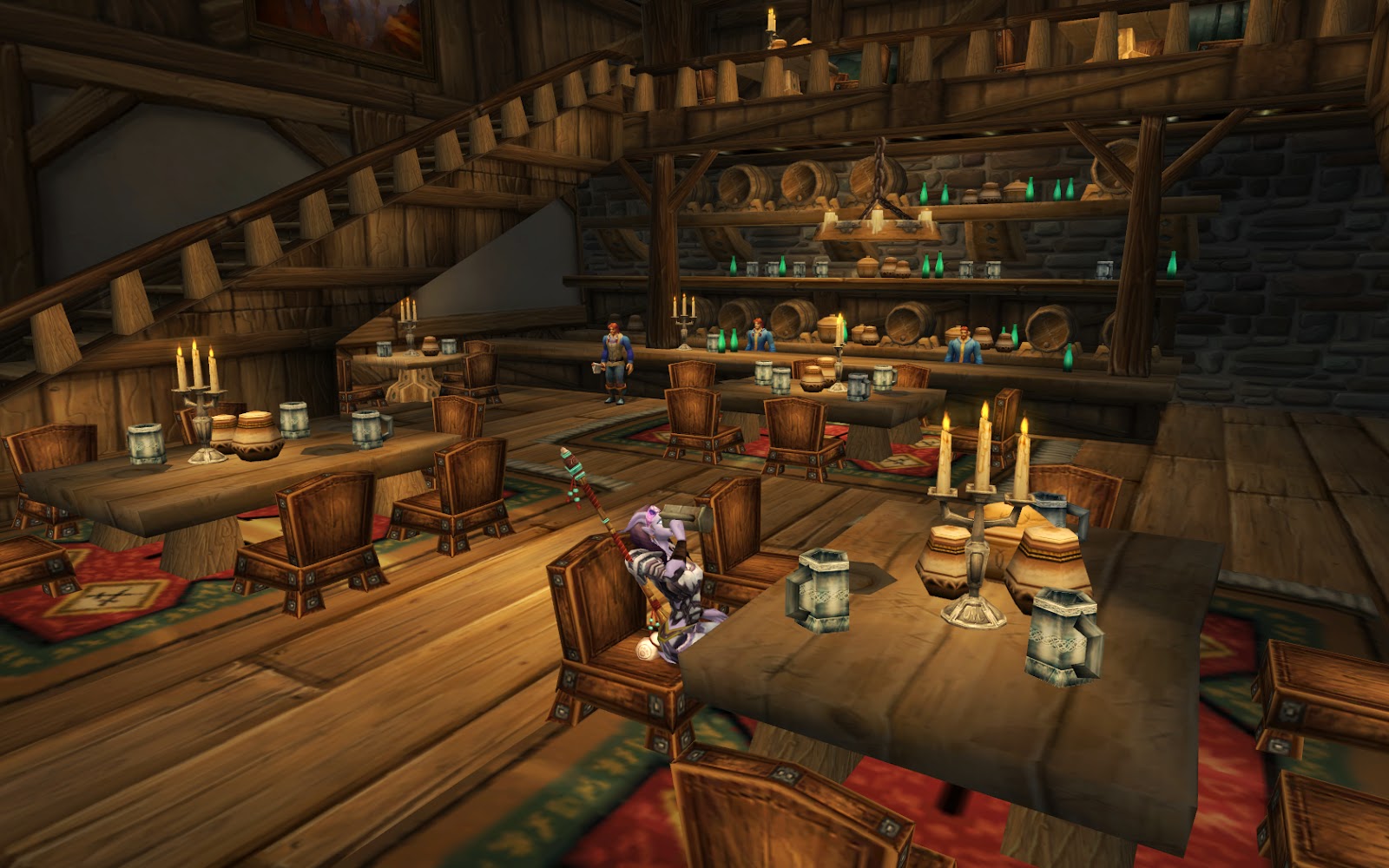 Soon she was sat down with a drink and a hot dinner. Steve was very chirpy and asked her about a thousand and one questions. He was also very helpful, he provided her with a map of the city, and told her where she could try to purchase a mount, and hilighted a few other places of interest on her map. After finishing her meal, she chatted with Steve a little longer then started to make her way back to the inn. Night was falling on the city and everywhere, little torches were being lit on walls and buildings. By the time she reached the inn it was almost completely dark, and she was glad to fall into a nice soft bed.

Posted by The BrewMistress at 08:24